The TLR debut of this legendary quartet! 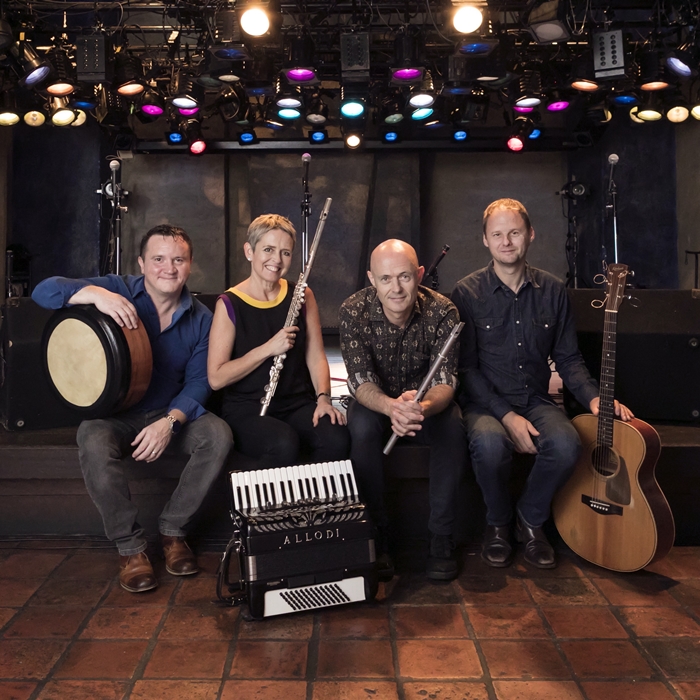 Due to overwhelming popular demand, Flook are back on the scene. After a recording hiatus of 14 years, Flook released their new album ‘Ancora’ in April 2019.

With the flutes and whistles of Brian Finnegan and Sarah Allen, the guitar of Ed Boyd and the bodhran of John Joe Kelly, this iconic band weaves and spins traditionally rooted tunes into an enthralling sound – with agile but tight rhythms and virtuoso improvisation. Flook possesses a rare blend of fiery technical brilliance, delicate ensemble interaction and a bold, adventurous musical imagination.

Formed over 20 years ago by four friends, Flook burst onto the international music scene with their debut studio album, ‘Flatfish’. The band had a remarkably successful performing and recording career – the sheer enjoyment of playing together shone through their albums. But it was their live performances that really captured the hearts of those who watched and listened. The rapport between these four musicians and the sheer enjoyment they developed in playing together, was commented on by audiences and critics alike. Having won Best Band at BBC Folk Awards 2006, Flook took a break in 2008, but they didn’t stay silent for long, and the last 4 years has seen them continuing to play occasional live shows, including short tours of Japan, Ireland and Germany, as well as festival shows.

Brian Finnegan said, “Way back in 2005 when we released our 3rd studio album ‘Haven’, little did we know that it would be our last for almost a decade and a half. We took a break in 2008, followed our hearts and instincts and went our separate ways; had kids, got hitched, loved, lost, explored the musical world post-Flook.

But when Flook came calling again in 2013, so the voltage returned and like all deep friendships it felt like we’d never been apart. Part of the decision to re-group was the understanding that we had much left to say as a band, and a certain responsibility to our loyal fans, old and new, to create Flook music of the present, rich in both past and future.
The imagery associated with the meaning of ‘Ancora’ is abundant indeed. It is the Latin word for anchor, be that to the seabed or in the kith and kin of our lives. It also means ‘hope’ and ‘again’. The great Italian master Michelangelo was attributed as saying “Ancora Impara” on his 87th birthday, meaning “I am yet learning”. This resonated in us and was present throughout the process of recording ‘Ancora’. So, deeper in we go. Thanks for listening.”

There is no shortage of virtuosity amongst the members of Flook, but the unique impact of this sensational Anglo-Irish group stems from the wholly intuitive, almost symbiotic, exchange between the various flutes, frets and skins. ‘Ancora’ marks a return after too long away, but also a continuation.

‘Nothing short of transcendent… No other band sound like Flook and the new material has pushed them to new, exhilarating heights.’ - Songlines