Doors at 7pm, Show at 8pm. All seated 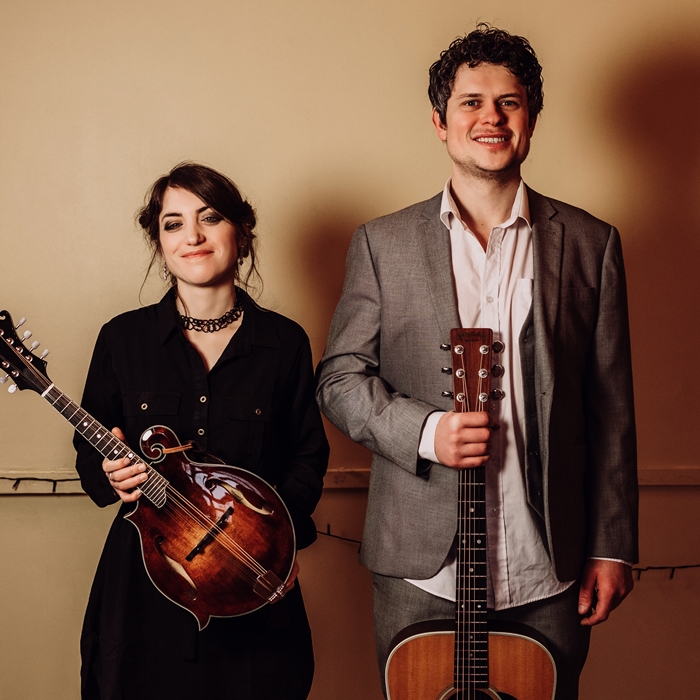 Contemporary folk/acoustic duo Gilmore & Roberts combine award-winning songwriting with astounding musicianship and their trademark harmonies to create a powerful wall of sound. Nominated three times at the BBC Radio 2 Folk Awards, Katriona Gilmore (fiddle, mandolin) and Jamie Roberts (guitar) met while studying at Leeds College of Music and released their debut album in 2008. Since then, the duo have toured Canada and mainland Europe, played some of the UK’s biggest acoustic festivals, toured with folk rock legends Fairport Convention and won countless accolades for their genre-spanning work.

Katriona Gilmore grew up in Knebworth, Hertfordshire, learned violin at school and started playing local folk clubs with her guitarist father at the age of 14. Starting her professional career with folk pop sensations Tiny Tin Lady and singer songwriter Rosie Doonan, she was invited to be part of a new lineup of The Albion Band in 2011 and subsequently joined Albion frontman Blair Dunlop on his solo tours. In 2017 Katriona joined established folk-roots band The Willows. Katriona has featured on many acclaimed albums as a session musician and has appeared onstage with such diverse acts as The Troggs, Kim Richey and Matt Berry.

Jamie Roberts was brought up in Barnsley, South Yorkshire in a musical family – his sister Kathryn Roberts is a well-respected singer on the UK folk scene. Jamie joined young English traditionalists Kerfuffle in 2007, formed The Dovetail Trio with Rosie Hood and Matt Quinn in 2014, and joined the critically acclaimed Emily Askew Band in 2016. Alongside his regular projects, he has performed with Nancy Kerr’s Sweet Visitor Band and Blackbeard’s Tea Party amongst others.

‘Capable of making you dance, cry and think…a masterclass in songwriting and a lesson in how to present songs’ – FOLK RADIO UK