We saw this fantastic duo several years ago at the English Folk Expo in Bury and were stunned by their brilliance. Now after trying and failing to get them here several times over the years, they’re here at last. Don’t miss them! 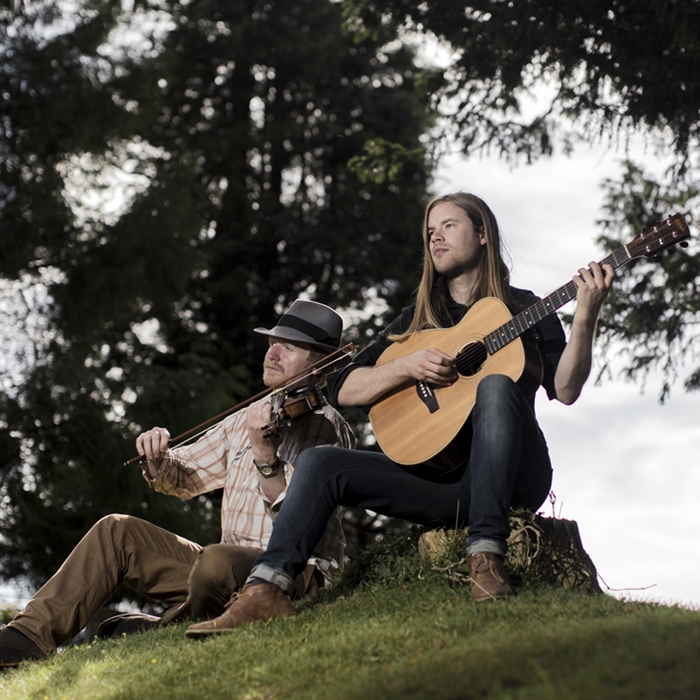 Kit Hawes and Aaron Catlow are a Bristol based duo playing acoustic, folk and roots music.

Weaving a musical dialogue between fiddle, guitar and voice, Kit and Aaron explore the rich musical heritage of the British Isles, and create original music inspired by the traditions they grew up in. In demand as musicians, writers and arrangers, Kit and Aaron have worked with many established artists including Grammy Award-nominated Yola, Seth Lakeman, Afro Celt Sound System and Roni Size.

Since the release of their highly acclaimed debut album 'The Fox' in 2016, the pair have built a reputation as one of the standout acts on the UK music circuit. Praise comes from music lovers and press alike, including Mark Radcliffe on BBC Radio 2 - 'reminiscent of Martin Carthy and the late Dave Swarbrick, I can give them no higher accolade', Acoustic Magazine - 'head and shoulders above the rest' and Living Tradition - 'mightily impressive'.

Their follow up album, which draws its name from the title track 'Pill Pilots', is due for release in March 2020. The Pill Pilots were a group of highly-skilled mariners, who for over a thousand years guided tall ships through the treacherous waters of the Bristol channel and the river Avon. The album was recorded live in a single room and celebrates the time-honoured relationship between the fiddle and guitar. The pair pay tribute to the past, whilst setting themselves apart with an unparalleled mastery of their instruments and dynamic range to create a musical conversation that wends its way through the album's nine tracks.

‘Fleet fingered and ingeniously arranged. .....deserve to be thought of as up there with the best of them’ – Songlines

‘Reminiscent of Martin Carthy and the late Dave Swarbrick and I can give them no higher accolade’ - Mark Radcliff, BBC Radio 2

‘Never a dull moment, with imagination firing throughout and an abundance of creative energy’ - Living Tradition