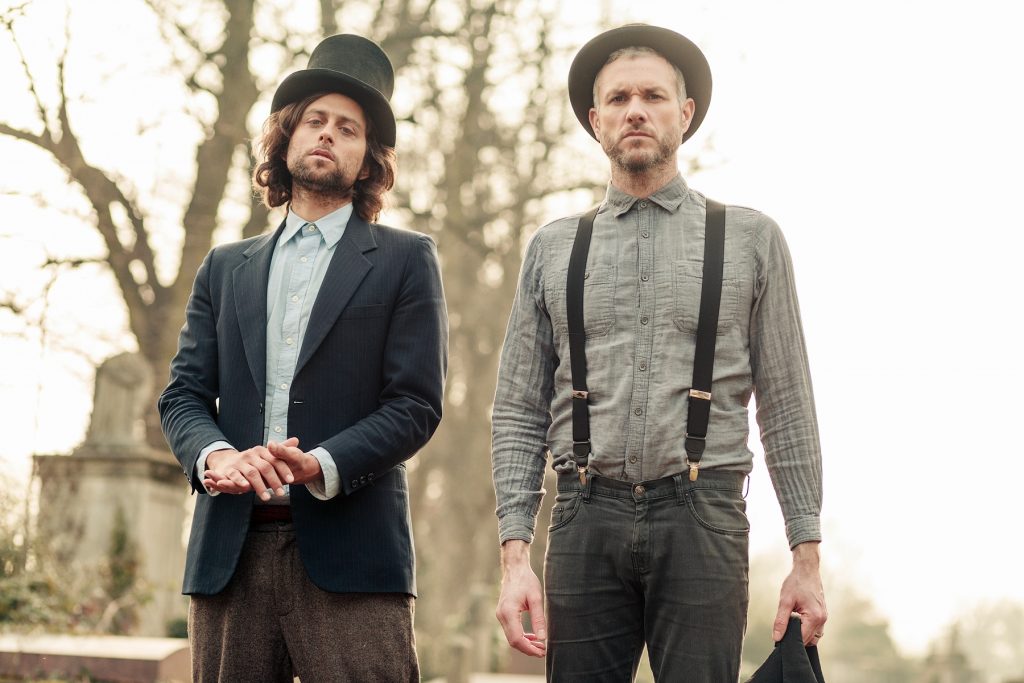 Imagine if Simon and Garfunkel were lost at sea, salt in their beards, wind at their backs, and whiskey in their bottles. What songs would they sing whilst stomping like melodious madmen on the boards of their boat? Or set yourself adrift for a piece, untether yourself from your daily affairs, bring only fresh water, a large writing pad and plenty of pencils. With only the endless sky above and the wine-dark waters below, what half-crazed tales would pour out of you?

Welcome to the mythic world of Son of Town Hall, the unusual union of Ben Parker of London, England, and David Berkeley of Santa Fe, New Mexico. Parker, a highly sought-after London-based songwriter/producer/multi-instrumentalist, and Berkeley, a celebrated singer/songwriter/guitarist/author have imagined a world that transcends time and space, complete with Victorian-era outfits, meditations about the sea and songs that beg you to sing along. The show is three-parts concert, one-part theater. It will leave you transformed, with your heart full of laughter and tears, drunk on adventure and the tragic beauty of the human condition.

Son of Town Hall springboards from the story of the aforementioned two finding themselves side by side aboard a junk raft (‘The Son of Town Hall’) crossing the mighty Atlantic in search of new lands, new inspiration and to recover squandered fortune. It’s as if the two sailed their ship back a century or so, though neither Berkeley, nor Parker openly acknowledge the anachronistic quality in their songs or presentation.

They do, however, recognize how special their sound is. “Perhaps it was the solitude out there,” Parker explains when we caught up with the bearded duo off the coast of Maine, “or maybe it was the strong gratitude you feel when you finally encounter another vessel. Or maybe it was all the raw coffee beans and cheap rum we consumed... well whatever it was, we learned to sing out there. More importantly, we learned to sing together.” And sing together they do, harmonies that haven’t been heard, perhaps, since the Louvin Brothers.

“You learn a lot on the high seas,” Berkeley adds. “Skills and endurance you didn’t know you possessed. Music and storytelling kept us afloat, kept us alive, really. We developed a blend and a sound that led even the sea creatures and the moon to pay attention. We just had to hope that it would translate on dry land.”

Well, as anyone at one of Son of Town Hall’s packed shows across America or Europe can attest, their sound has translated just fine. Audiences consistently leave a show muttering that they’ve never quite experienced something like it. And if the early indications prove true, the two will soon need to build a bigger boat, for everyone who floats near them wants to jump aboard.
‘Sensational!’ - John Platt, WFUV
‘Nothing short of stunning’ - Lisa Schwartz, Director Philadelphia Folk Festival