We’re thrilled to welcome this band, featuring some of the finest musicians in the UK, to The Live Room.

This is a special project where six artists come together to celebrate the music of John Martyn. Each brings their own story and connection to John’s music which adds to the fabric of the overall experience of the project.

May be part standing. Doors at 7pm, show at 8pm 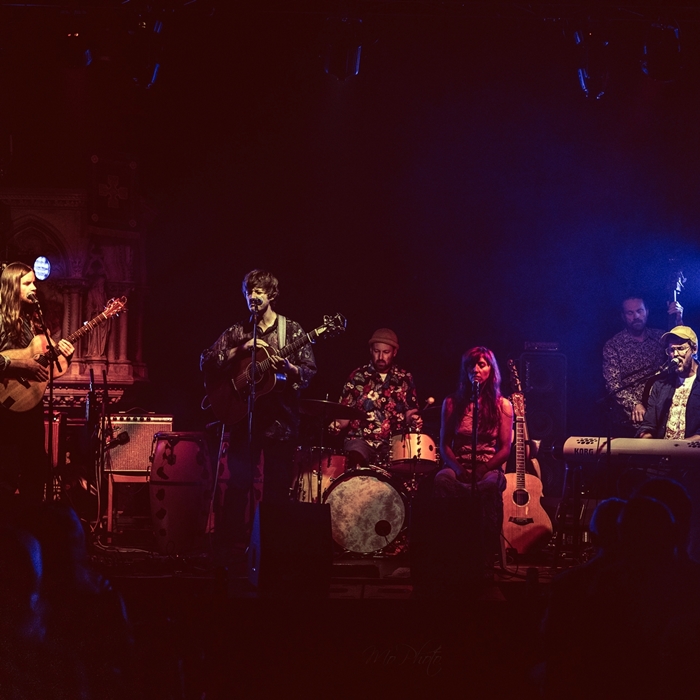 This diversity of different musical paths of the musicians recreates the many different aspects and eras of Martyn’s music and is delivered in a sensitive and poignant manner.

In the wake of a special one-off, sold-out show in 2018 at the Camden Jazz Cafe, the group decided to take the project on tour and the warm reception it has received has inspired them to continue. Since then they have regularly toured the UK and mainland Europe, as well as bringing John’s music back to the fes-tival circuit. Each tour they continue to introduce more of John’s back catalogue from obscure live record-ings to classic favourites, reworked and presented with rich harmonies and diverse instrumentation.

Blythe Pepino - By the end of 2016, she had released her major label debut as front-woman of Vaults, sung on that year’s John Lewis Christmas ad and toured with London Grammar. Not one to compromise her artistic vision, in early 2017 she turned her back on the major label existence to pursue her penchant for the strange and leftfield with new band, Mesadorm.

Kit Hawes is a virtuoso guitarist, composer, singer songwriter and mandolin enthusiast. Coming from a musical family, Kit was steeped in folk and roots music from the outset; learning from his parents and the many musicians who would pass through the farm. At age 14, after dropping out of school to pursue a career as a professional musician, Kit has played all over the world and has gained a reputation as top class instrumentalist working with a wide range of artists including Seth Lakeman, Cara Dillon and Yola.

Pete Josef has always been a soul singer at heart, but his Multi-instrumental skill’s have led him into some interesting situations. For several years he has recorded and performed live with Roni Size and Reprazent, and more recently with Rag ’n' Bone Man as well as being a touring artist in Kelis’ live band, gracing the stages of Glastonbury festival, Jools Holland and Fuji Rock. All whilst in this time working on his debut album ‘Colour’ which was featured at Gilles Peterson’s Worldwide Awards.

Sam Brookes In 2011 his eponymous debut Album saw him named as Sunday Times ‘Breaking Act’ and his independently released follow up Kairos was picked as one of the best albums of 2014 by The Inde-pendent. Considerable streaming success and support slots for the likes of Willy mason, Scott Matthews and Joan Armatrading have earned Sam a dedicated following and growing anticipation for his third al-bum.

John Blakeley & Jon Short form a uniquely creative and original rhythm section who over the years have played together in variations incarnations with such artists as Yola, Sheelanagig and No Go Stop.

‘This is unlike anything I’ve heard before’ - Folk Radio

‘With his keening tenor vibrato sailing effortlessly into the upper register, there’s something of Tim Buckley about Sam Brookes’ - Andy Gill, The Independent