It’s our first show of the Saltaire Festival, come along for some blistering bluegrass! 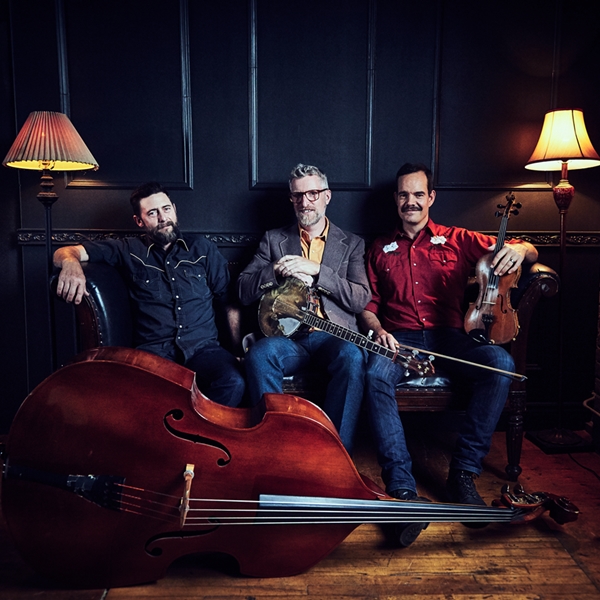 The Lonesome Ace Stringband is an old-time band with bluegrass chops that play some righteous folk and country music. There's a depth of groove and sense of space not often heard in bluegrass today, a level of instrumental interplay and vocal blend uncommon in old-time, and an on-stage rapport that transcends all of this. Three Canadians lost in the weird and wonderful traditional country music of the American South, the band members Chris Coole (banjo), John Showman (fiddle) and Max Heineman (bass) are each journeyman musicians and veterans of some of Canada's top roots music acts (New Country Rehab, The David Francey Band, The Foggy Hogtown Boys, Fiver).

Instrumentation alone instantly sets LAS's sound apart: consisting of just fiddle, clawhammer banjo, and upright bass, the band moves freely between having a sound so powerful that it doesn't seem like it should be coming from a trio, to a sparseness and fragility that draws the listener in and refreshes the ear. All three are compelling lead singers, each with his own character and range. This allows for the vocal texture to shift depending on how the song needs to feel - and what the song has to say. When those voices come together the power of the harmonies is unshakable. It's clear to anyone who's heard LAS that they just don't sound like any other band.

As of 2019, the band has toured internationally, been engaged at some of the largest festivals in North America (Merlefest, Winnipeg Folk Festival, Rockygrass), and recorded 3 albums. On the first two albums, Old Time (2014), and Gone For Evermore (2016) the band leaned heavily on the traditional old-time cannon to express what it needed to say musically. In 2018, with the release of When the Sun Comes Up, the band showcased its songwriting and studio savvy, offering up a more progressive interpretation of old-time music, and taking it's sound to new places. All three albums have been embraced by both fans and critics alike.

2019 will see LAS at festivals and concerts throughout North America, as well as four European tours. Wherever they go, listeners will hear a compelling and original band fuelled by the creative spirit that is the seed of all traditional music.

‘Three of the most accomplished Old-Time musicians on the planet, the Lonesome Ace Stringband does a masterful job melding their talents’ - Brad Kolodner (WAMU Washington, DC)