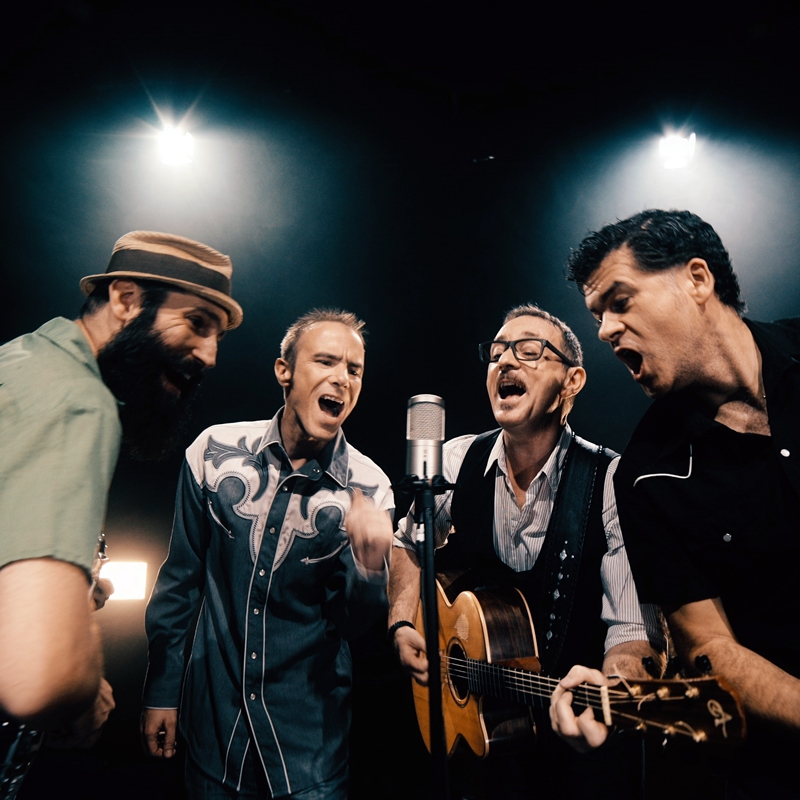 Fire on the Rails is Track Dogs’ second LP recorded on the Studer A80 analog tape machine recovered from Abbey Road at Playground Studio in Madrid. Since Kansas City Out Groove (2018) and their compilation of ukulele-based recordings, Uke Songs By Track Dogs (2019), the band has deepened and elaborated its sound explored. Producer Germán Gutiérrez has managed to make Track Dogs pack even more punch and achieve grandeur in the sound that they’ve been cultivating over more than 100 songs in their recording career.

Track Dogs turned to Nashville talent to up the game on their new compositions. Eli Bishop (Grand Ole Opry, Wynton Marsalis) provides string arrangements for ‘Love And War’, ‘On The Last Night’ and ‘Abi’s Lullaby’. In line with the Nashville connection, Americana star, Ashley Campbell, lends her pristine banjo picking to ‘Don’t Delay’. Track Dogs have extended the reach of their established sound to the realm of world music with ‘Love And War’. Apart from the strings of Eli Bishop and a cracking doumbek, the album’s lead track pulls together folk legends Phil Beer of Show of Hands, grammy-winning Lisa Gutkin of the Klezmatics and Fergal Scahill of We Banjo 3 to elevate the call for unity and tolerance that ‘Love And War’ shouts for. Danny Erker (The Jones St. Boys) also adds some stellar mandolin to the track ‘Dragonfly’s Castle’.

‘Fire on the Rails delivers just as much pleasure as their live shows…a combination of adventurous instrumental arrangements, top-rate musicianship, tight vocals and lyrics with a punch.’ - Johnny Whalley, Folkradio.co.uk

‘From the opening notes, the listener is taken on a journey, that explores Americana, Tijuana brass, folk, sultry swing, and Revival. With three vocalists in the band, they collectively work wondrous memorable harmonies into their songs’ - Gerry McNally, folkandtumble.co.uk

‘A wholesome and electrifying act, Track Dogs change the face of music with their vibrant and invigorating songs to produce an album that is the best way to start 2020.’ - Joe Knipe, Artree.co.uk